Keeping an enormous ancestral pile viable is no easy task, says Mary O’Sullivan, but William and Emily Bunbury are up to the challenge.
Photography by Tony Gavin
By Mary O Sullivan

“Who says money doesn’t grow on trees?” William Bunbury asks with a laugh, as he holds up one of his Bunbury Boards, the latest in a line of money-making schemes he and Emily, his wife, have launched over the past few years. It’s a simple chopping board, but it has several unique selling points: every board is made from wood from William’s centuries-old family estate, Lisnavagh in Rathvilly, Co Carlow; no tree is felled for the wood, but instead toppled naturally, or was otherwise damaged; and, making each board even more special, there’s a number stamped on the back which, when checked on the Lisnavagh website, gives the history of each board and the tree it came from.

In spite of all that, William’s laugh is more ironic than exultant – he knows he would need to sell a huge number of the boards to make significant money, but he and Emily have to keep coming up with ideas to keep the estate and their rambling, Gothic Revival-style house going.

As well as running the family farm and the Lisnavagh Timber Project – which involves using their kiln-dried, clear-conscience timber in the crafting of kitchen worktops, mantelpieces and a selection of other items like the Bunbury Board – they host private weddings and other bespoke events in their stately home. “We can do any number of people from 40 to 370, and we can do a total of 20 weddings a year,” William says. “We started in 2007; we did five in all that year. To see the transformation in the place for that first wedding: all lit up, the warm atmosphere!” he enthuses. “This house loves a party.”

Now a farmer, businessman, husband and father of two, William himself was a bit of a party man at one stage. He recalls his father asking him when he was 18 if he really wanted to take on the estate, or if he wanted to become a rock star – and, there was a time when he did actually try to be a rock star. He and his music partner, George Bowyer, reached No 33 in the charts at one stage. However, William was proud enough of his heritage – the Bunburys can trace their roots back to the Battle of Hastings in 1066, and to their arrival in Carlow in the 1660s – to go to agricultural college both here and in England with a view to eventually taking over the running of the farm. He travelled widely in Australia and New Zealand, and spent eight years working at a rural practice of chartered surveyors in Lancashire, before coming home in 2000.

“It took two years before I took over the reins completely,” he recalls. “I spent a year twiddling my thumbs when I came home.” But William didn’t exactly waste his time – it was around that time that he and Emily hit it off.

“We knew each other when we were 18, but we drifted apart. We met again in 2001 – we were both asked to the same dinner party,” he explains. “Emily was looking for a house in the area – she was hoping to buy an old ruin for about €70,000. She ended up marrying into an old ruin!”

Emily grew up in Kildare, but when her father died when she was in her teens, her mother moved to Cork. Soon afterwards, Emily took herself off around the world, often travelling on her own. She then spent 10 years in England and became an events and tours specialist, organising groups to go snipe shooting and deerstalking in Ireland. She still does it. “It’s just me and a website,” she says. Emily explains how she was considering moving back to Ireland and was looking at a cottage near Hacketstown, Co Carlow. “Then along comes William,” she says. “We used to meet at pony club and discos. He was really shy, and I was very shy, and we became friends. And I found myself here.”

They married in 2002, and have two delightful, spirited daughters, Roseanna, five, and Alice, two. Initially they lived in the house with William’s parents, but since then Lord and Lady Rathdonnell have built a new house for themselves on the estate, leaving William and Emily in charge in the main house. The couple have been working on it ever since – all 11,000sq ft of it. And they’re lucky that it’s not more vast – it once was. Built in 1840, Lisnavagh decreased in size when William’s grandmother had large parts demolished in the Fifties – her idea was to cut it from a rambling mansion to a hunting lodge. What is now the library was originally the kitchen, and what is the dining room was the scullery and pantry. It is still quite vast, with not only the massive, panelled library but also halls, ante-halls, music rooms and dining rooms – all full of lovely period pieces.

In 2005, the family decided to rewire the whole house. It was a big undertaking, but if they were to host weddings and other events, a massive redecoration job was essential. They paid particular attention to the bedrooms – up to 40 people can be accommodated when they combine the bedrooms in the house with those available in other houses on the estate. William’s brother, Turtle, and his wife, Ally, live in one house, and his sister, Sasha, and her husband, Tom Sykes, live in another. William’s other brother, Andrew, is a landscape architect in Co Down. It has been a lot of hard work so far for the couple but, having grown up in a big house, William knew before he started what it would take to keep Lisnavagh going — Emily didn’t.

“I’m not totally naive, but I was madly in love with William and I really had no idea what I was letting myself in for,” Emily admits. “My father-in-law is not an ‘I told you so’, but I know he knows how tough it is. He gives me these knowing looks.” Helped by local interior designer Sue Craigie, Emily oversaw most of the colour schemes in the bedrooms, and the result is seven romantic bedrooms, most of which have wonderful period beds and old marble fireplaces with working fires. The rooms are decorated with lovely old plates and other family artefacts. “Even though we use the bedrooms for the guests at the weddings, we didn’t want them to be too hotel-y,” explains Emily. “There were such lovely plates, all stuck in a cupboard, I thought it would be nice to display them.” Each of the bedrooms has its own evocative name, recalling in some cases a regular visitor to the house in the old days – the Colonel’s Room is so called because a Colonel Kane always stayed in it, the Oak Room got its name from its oak four-poster, and the Night Nursery is where the nanny used to sleep. Five of the bedrooms also have enormous period bathrooms en suite.

Emily and William don’t have a nanny for their two daughters but, as working parents, they do have a part-time au pair. Otherwise, they’re very hands-on, no matter what the job to be done. They have a separate flat, and even though the house is vast, it can’t be easy to have to clear the rooms – it can be done in half an hour, according to William – and have strangers all over your house at regular intervals.

But Emily doesn’t indulge in any negativity. “It’s been such an adventure; when I look back at my life in London, it’s changed so much, really fast,” she says. “I look at my kids and think I’m so lucky. I wouldn’t change it for the world.”

To residents of suburbia, a place such as Lisnavagh looks like the home of the cash-rich, but William and Emily make it clear that it is anything but. However, they’re not whinging, and say that if things go according to plan with the weddings and the timber project, they’ll survive. So check out those Bunbury boards. 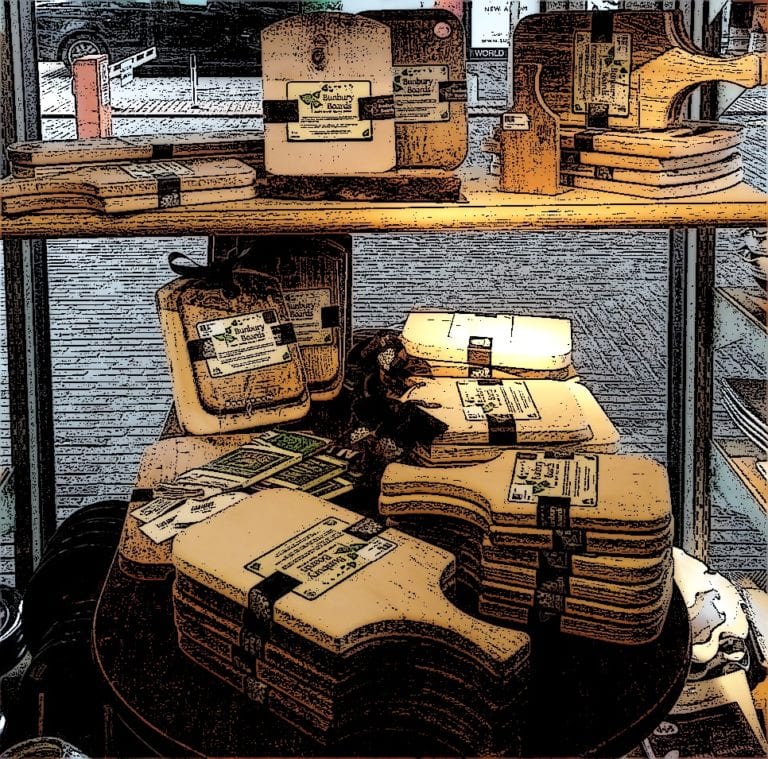 Bunbury Boards are back in the shops after a re-structuring of the business and a re-appraisal of its core values. Sometimes the only way to fix something is to stop it first.  “To give an analogy, sometimes even the most luxurious liner needs to stop sailing and go into dry dock for a re-fit”, says… 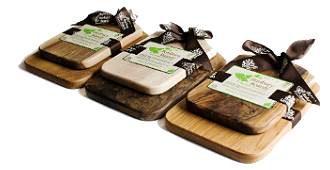 One of my favourite kitchen implements is a giant wooden cheese board and matching individual serving boards, made from a gorgeous slab of wood salvaged from a science lab in a school in Glasgow where my uncle taught technical drawing and woodwork. I love the history that comes with these lovingly crafted works of art,… 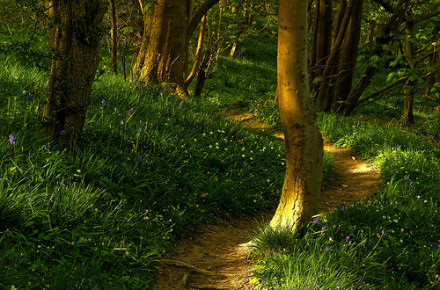 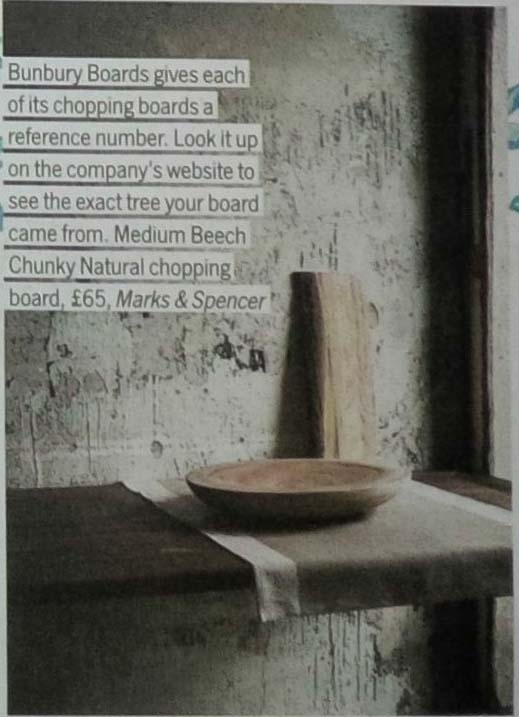 New Season Heroes The latest trend in retail is ‘PROVENANCE’ – knowing the full story behind what we buy and where it comes from. And this is all available in a shop near you… Words – Morag Bruce When is a plain-white candle not simply a boring plain-white candle? When it’s from the London Honey Company and 50 per… 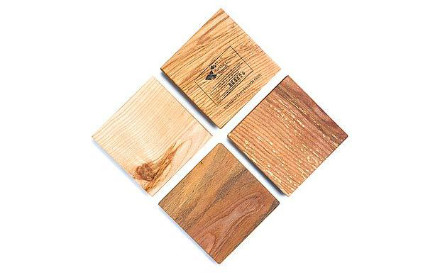 Traceable trees At first glance these coasters look like perfectly nice wood offcuts that have been put to good use. But flip one over and a stamp informs you that the board is handcrafted from fully traceable hardwood timber. You are invited to visit Bunbury Boards’ website to enter the coaster’s individual code, at which…