THE SOCIAL NETWORK: The billionaire Yelena Baturina and her husband, Yury Luzhkov, flew in and out of Dublin on Wednesday on their private aircraft. Baturina, the new owner of the Morrison Hotel, was here for an official red-ribbon reopening in the afternoon. The Russian owners were gone before the party that evening.

To mark the event, the powers that be at the hotel bought the owner’s husband a Bunbury Board from Lord Rathdonnell’s estate in Lisnavagh, Co Carlow, which can be used for carving and serving. Every board is handcrafted and individually stamped and coded. This code, when entered on a website, reveals the story of the tree from which the board was cut. Luzhkov was quickly on the net, looking up his.

After a €7 million refurbishment, the Morrison is bright and airy. Caroline Downey-Desmond of MCD, Pat Creed of Warner Music, Steve Wall of The Walls, the former Westlife star Nicky Byrne and the rocker Mundy attended. The 138 rooms all feature lyrics by Irish singer-songwriters, and Mundy took time out to visit one inscribed with lyrics from his single Gin Tonic Sky.

The tailor Louis Copeland arrived from his Capel Street shop. His father was born in a building that once stood on the hotel site. The presenter Mairead Farrell popped in with her five-year-old son, Dara, to meet her Eurosong hopeful, Kasey Smith. Farrell is one of five Eurosong mentors, each of whom chooses and coaches a potential Eurovision candidate. All five acts performed on The Late Late Show last night.

Kathryn Thomas had been in the night before to dine at the Morrison Grill; she recommended the Josper grill steaks. Mind you, you wouldn’t want to pop up on an Operation Transformation scales after one.

Peter Coonan, who plays Fran in Love / Hate, was in demand for photos. He got in character to place a call to a guest’s sister, whose excitement was audible to all.

Who we spotted Virginia Macari and Roz Flanagan; Paulo Tullio 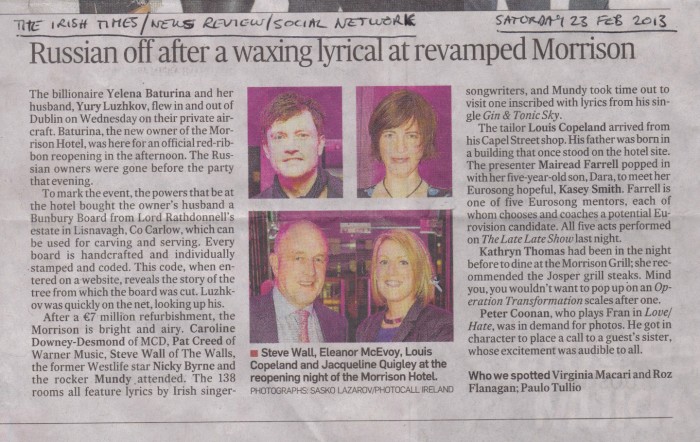 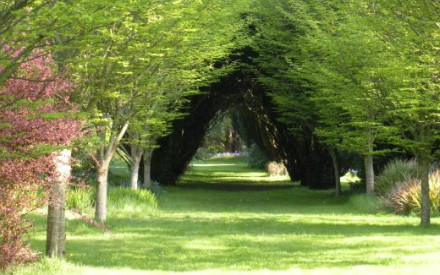 SUSTAINABLE GIFTS Bunbury boards are the brainchild of William Bunbury, who, after inheriting the beautiful Lisnavagh Estate in Co Carlow needed to find a sustainable way of making the estate financially viable. The simple chopping board he’s created is making a name for itself in the UK and the US because of its several unique…

Come and see our brand new display unit at Stand 30 in Showcase this year. We have several new products to show you and entice you! Come and visit us at Stand number 30 and meet William Bunbury our Sales & Marketing Director and Willie McHutcheon, Manager in the Workshop.  Both would love to meet…

Thursday, 5 May 2011 [two_fourth] Birr will play host to a brand new event on the calendar, the Irish Forestry, Woodland and Bio Energy show over two days next weekend. The new national forestry event kicks off this Friday May 6th and Saturday May 7th at Birr Castle Estate. Minister of State for Forestry, Shane…

Bunbury Boards do a wonderful job of creating functional woodcraft out of carefully sourced indigenous trees. This new 12 inch pizza board – which has grooves to assist cutting your pizza into six slices – comes with its own ‘tree certificate’. Each certificate gives a full back-story to the tree which became your board, including…